Tudela is the second largest city in Navarra, but with a population of just 35,000 it’s not so surprising that the senior club, Club Deportivo Tudelano, has returned relatively slim pickings. Formed in 1935 following the merger of Tudela CF, Arenas, Ancora Fordín and the fantastically named El Vegetarianos, Tudelano played their first matches at Campo de Griseras, next to the Plaza del Toros. Tudelano stayed at the somewhat spartan Campo de Griseras until 1969, when they moved to the west of Tudela and the purpose built Estadio José Antonio Elola. The site of the old Campo de Griseras is now a primary school that bears the same name.

The new stadium was named after José Antonio Elola, the National Deputy of Physical Education and Sport. He had no obvious ties with Tudela, having been born in Argentina. However he fought for the Nationalists in the Civil War and was also Governor of Cuidad Real and Sevilla. As one of Franco’s appointed cronies, it appears that it was just his turn to have something named after him. The stadium was inaugurated on 17 August 1969 with a friendly match against CA Osasuna. Tudelano opened the scoring in the second minute with a penalty from Maranhao, the club captain. Osasuna equalised in the second half and the match finished one-a-piece. At a cost of 10 million Pesetas, the stadium was a huge improvement from the basic Campo de Griseras and was the centre piece of the city’s sporting village that also included a swimming pool and an indoor sports hall.

What success Tudelano experienced in its first 75 years, was at best mediocre. In 1942, the club reached the play-offs for promotion to La Segunda, but lost out to Terrassa. Thirteen years later, after winning the title in their section of the Tercera, Tudelano reached the play-offs for La Segunda again, but faired poorly in a group that featured Binefar, Arenas Getxo, Plus Ultra, Rayo Vallecano and Girona. The club had to wait until season 1977-78 to sample football in Segunda B, although no play-off victory was required, as the league was restructured and a ninth place finish in the Tercera was just high enough to secure a berth. The team was ill-equipped for the higher level and the season ended in relegation back to the Tercera. 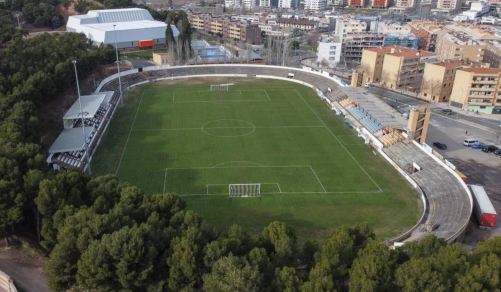 The club next won promotion to Segunda B in 1990-91 and this time it was on merit after winning their section of the Tercera. The stay in Segunda B lasted five tortuous years, with each season proving to be a battle against relegation. They finally succumbed at the end of the 1995-96 season. At this point, Tudelano entered something of a decline, failing to reach the end of season play-offs on ten consecutive seasons. This was finally rectified at the end of the 2007-08, but that and four subsequent visits to the end-of-season thrash proved fruitless. Finally, after 16 seasons away from the third tier, promotion to Segunda B was gained in June 2012 after play-off victories over Azuqueca, Villarrobledo and Catarroja. In the summer of 2012 the municipal council of Tudela renamed the  stadium Estadio Ciudad de Tudela.

The Estadio Ciudad de Tudela now over 50 years of age and it is beginning to show. The main stand is still quite impressive, in a 1960s urban architecture sort of way. It has a pre-cast concrete cantilevered roof, either end of which stand two towers. In the early days these towers had flag poles atop, but now there is a clutter of aerials and loudspeakers. I’m sure at one point they did look the part, but now they resemble the training towers you find at fire stations. The shape of the stadium is oval and on opening a gravel athletics track surrounded the pitch. This fell into disrepair and now the whole area is turfed. Eight steps of terrace curve around both ends to meet the south terrace, which was originally open, but now has three short cantilevered covers, the middle of which is higher than the other two. This is to integrate the media booths and a bar that sit at the back of the terrace on the halfway line. The area under the covers was seated following Tudelano’s promotion to Segunda B in 2012.

The original layout of the stadium was not unlike that of Real Balompédica Linense’s municipal stadium, which also opened in 1969. There has been talk for a number of years about moving to a new ground, but the local municipality did not have the appetite or the funds to proceed. In 2021, plans were announced for the €3m renovation of the stadium. This would see a change to the oval layout by adding new terraces close to either end of the pitch. As for Tudelano, they have enjoyed their longest period of consistency in Segunda B, and following the restructuring of the Spanish Leagues in 2021, comfortably earned a place in the new third tier, the Primera RFEF.