You may never have heard of Club Esportiu Constància, but back in the 1940s, this team from the Mallorcan town of Inca came very close to winning a place in La Primera. Founded on 2 December 1922 by Inca’s Mutual Aid Society, the team played their first match on 26 December, winning 2-0 at Iquense. On 18 February 1923, the club played their first match at a field in the El Cos area of the town, which stood on the current day Avinguda de Rei Jaume I. In 1928, the club took out a loan to enclose the ground and add terracing.

Constància was soon establishing itself in the Balearic regional league and won the title in three consecutive seasons from 1932-35. After the Civil War, the club benefited when the Spanish Leagues were reorganised, as they and RCD Mallorca were invited to compete in a regionalised second division. Constància finished fifth, losing out on fourth place and safety to Castellón on the head to head record. The following 1940-41 season saw Constància win their first Tercera title, running up a club record victory in the process. On 4 April 1941, the club beat Soledad 30-0 at Camp d’Es Cos and at the end of the season won promotion back to La Segunda.

This golden era was undoubtedly aided by an influx of Catalan players who had moved from their home region during the war. The Camp d’Es Cos now featured a raised tribuna on the western side of the ground that ran from north to south and finished level with the penalty area. The club’s changing facilities and offices were in the south west corner, whilst narrow terracing made up the remaining three sides of the enclosure. Over the next three seasons, Constància forged a formidable home record.. The club finished fourth in 1941-42 losing just the one home match, 1-2 to eventual champions CE Sabadell. In 1942-43 the club went one better and finished in third place. Once again their home form was impressive, losing just once, a costly 0-1 defeat once again to CE Sabadell, who courtesy of that victory won a place in the promotion play-offs. La Segunda was reduced to a single national league for the 1943-44 season, but Constància came within 90 minutes of La Primera.

Once again their home form was impressive, losing just the once to Ceuta, a defeat that cost them second place and automatic promotion. They qualified for the end of season promotion play-offs, but lost 0-4 to Deportivo La Coruña in a one-off match at Real Madrid’s Estadio Chamartin. Constància had peaked. The following 1944-45 season was played at the wrong end of the table and whilst the home form remained good with only two defeats, one win and a draw on the road saw them enter the final match two points ahead of island rivals RCD Mallorca. The game on 20 May 1945 was played in Palma and was the last game at Mallorca’s Campo de Bon Aires. With passions high, Constància came off second best, losing 0-2 and had to face Real CD Cordoba in a relegation/promotion play-off. Once again, the match was played in Madrid at Chamartin and once again Constància came off second best, losing 2-3.

Back in the Tercera, Constància started to falter and in 1951 dropped to the Mallorcan regional league. Two seasons later the club was back in the Tercera and started to long haul back to La Segunda, securing runners-up position on three occasions between 1955 and 1961. Finally, in 1961-62 Constància won the Tercera and promotion to La Segunda. Time had moved on and the second tier now consisted of two regional leagues with 16 teams in each division. Once again Camp d’Es Cos proved to be a fortress with just two defeats coming at home. The away form was the problem, but their one victory came at eventual champions Pontevedra and in the end a twelfth place finish was achieved. The next season, 1963-64, was to be the last at Camp d’Es Cos and the relatively comfortable tenth place was achieved due to an unbeaten home record.

The 1964-65 season saw the club finish thirteenth and as a result enter a play-off against Bejar Industrial to remain in La Segunda. A 0-1 loss in the Salamancan town was rectified with a 1-0 victory at Camp d’Es Cos. The tie went to a third match, conveniently played in Palma de Mallorca and this time Constància prevailed by two goals to one. The start of the 1965-66 season saw Constància move to a new ground when the Nou Camp d’Inca was officially opened on 29 August with a friendly against Elche. Their new home was situated around 750 metres to the south of Camp d’Es Cos, and bordered the Palma to Sa Pobla railway line. The Nou Camp was an open bowl consisting of a dozen steps apart from the north west corner, next to the main tribuna, where it stopped abruptly and diminished to a mere half-dozen steps. With a capacity of 10,000, it was a more substantial enclosure and was designed to herald a new future for the club.

Constància would have hoped to have moved on, but at the end of the 1965-66 season, they found themselves in exactly the same position, thirteenth place and facing another play-off for survival. This time the club was paired with Eibar and things looked bleak when they returned from the Basque country with a 0-2 deficit. Incredibly, Constància turned it around winning 3-0 to retain their place in the second tier. Unfortunately, the immediate future was to be spent fighting relegation from La Segunda. It was more of the same in 1966-67 season when a fourteenth place finish saw them overcome CD Lugo 3-1 on aggregate in the play-offs. How long could these escapes continue? Well, not very long is the answer. La Segunda was to be restructured into one division at the end of the 67-68 season and only sixth place would guarantee survival. With the writing on the wall, Constància rolled over and the home form that was paramount to their survival deserted them. In the end the club finished bottom with just fifteen points.

The trap door was well and truly open as Constància fell another level to the Balearic Regional league in 1969 and it took a further five seasons to return to the Tercera. The rebuilding took time and it wasn’t until the early 1980s before the club was challenging at the top of the Tercera. The title was won in consecutive seasons 1982-84, but promotion, now to Segunda B, eluded them. This was finally achieved in 1987-88 and Group II of Segunda B featured three other clubs from the Balearics, namely Atletico Baleares, UD Poblense and Sporting Mahones. Constància put up a good fight but ultimately fell short, just one point shy of safety. Constància dropped to the regional leagues again in the early 1990’s, but since returning in 1992, they have been an almost permanent presence at the top of the Tercera. Four further league titles followed, but it took turn visits to the end of season play-offs to earn promotion.

The 2011-12 season was remarkable for Constància on a number of fronts. On the pitch, the team proved incredibly resilient, remaining unbeaten in its first 29 fixtures. Their eighth Tercera title was sown-up with two games still to play, all the more remarkable given that the players had gone without pay for the final couple of months of the season. Drawn against Villarrobledo in the Campeones group of the play-offs, hopes were high that the hoodoo could be ended, when Constància returned from La Mancha with a 0-0 draw. Bernat Alomar gave the islanders the lead on 10 minutes, but it all seemed to be heading for an all too familiar finish, when Villarrobledo equalised with 11 minutes to go, thus leading on away goals. Then in the 5th minute of injury time, Mateo Ferrer’s looping header sent the crowd of 3,000 wild and Constància up to Segunda B for the first time in 24 years. Despite finishing the 2012-13 season with defeat to Zamora in the Segunda B Relegation Play-off, Constància’s position in the third tier was secured by UD Salamanca’s liquidation. Alas, there would be no reprieve a year later, as the club finished one off the bottom and dropped back to the Tercera in May 2014. 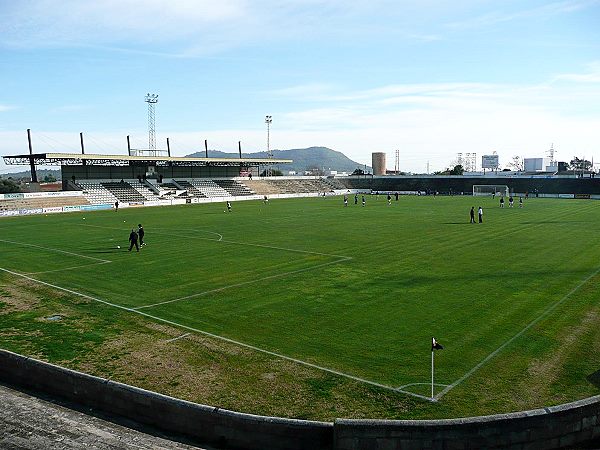 Parts of the Nou Camp D’Inca has aged remarkably well, and still has a presence about it. The terracing is in good condition and Constància can still pull in a crowd of 3-4,000 when they reach the play-offs. A cantilevered roof was added to the tribuna in 1998 and black and white seats where added to the central section a few years later. However, the roof in particular has suffered through a lack of maintenance. During the summer of 2016, €60,000 was provided by the local council to re-lay the pitch, which meant that Constància de-camped to the other side of the railway track and the Campo de Salista for the first months of the 2016-17 season. Thankfully, the commitment of the local council & Constància’s legion of committed followers has prevented this grand old stadium suffering the same fate of the Estadio Lluis Sitjar & Estadio Balear.