In the late 1970s, Gonzalo Alonso was president of Real Valladolid and he had an eye for an opportunity. With his beloved club on the verge of returning to La Primera after a sixteen year absence and the World Cup coming to Spain, Alonso set about lobbying both the Spanish Football Federation and the local municipality. First up, he wanted Valladolid to be a host at España 82. Next, with no realistic chance of redeveloping their antiquated Estadio José Zorrilla, Alonso wanted a new stadium. Well thanks to his persuasive manner and commitment, Valladolid did host three matches in the 1982 World Cup in the only purpose built stadium at that year’s finals. 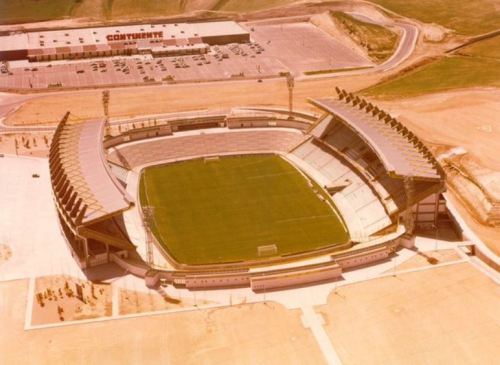 The municipality identified land to the west of the city, around 2km from their existing stadium. A budget of 700 million pesetas was agreed, with significant grants coming from the National Sports Council and the Spanish FA. Work began in November 1980 and little over a year later on 20 February 1982, Valladolid played host to Athletic Club in a league match that they won 1-0. It also had the honour of hosting the final of the Copa del Rey in April of that year before France, Czechoslovakia and Kuwait rolled into town for the Mundial. At the time of the World Cup, the stadium consisted of a single open tier that curved around the pitch, with two identical covered stands making up the upper tiers on the east and west sides of the stadium. The capacity for the World Cup matches was 29,990 and the three matches attracted good crowds. You can read more about the Nuevo Estadio José Zorrilla here.

CZECHOSLOVAKIA vs KUWAIT – GAME 2 GROUP IV
The under-cooked Czech’s were lucky to escape with a draw against a well prepared Kuwait side. Panenka scored from the spot mid-way through the first half, before Al Dakhi’s thunderous drive evened things up in the second half.

FRANCE vs KUWAIT – GAME 4 GROUP IV
The French were too good for the Kuwaiti’s, winning the match comfortably. However the match is most remembered for the invention of the head of the Kuwait FA, Prince Fahid, who stopped the game for 8 minutes after Giresse had ‘scored’. They maintained that they had heard a whistle and stopped. Eventually the match restarted after Giresse’s goal was disallowed.

CZECHOSLOVAKIA vs FRANCE – GAME 5 GROUP IV
A fairly dull affair came to life with ten minutes to go, when Panenka equalised an earlier Didier Six goal. The Czech’s played their best football of the tournament after that, but it was too little too late as France progressed to the second round.