The city of Gijón was experiencing something of a boom in post-Franco Spain. Its Port and steel industry was growing rapidly and so was its population. Not wanting to be left out, and after years as make-weights and also-rans, Real Sporting Gijón was on top form, pressing the established teams all the way in both the league and cup. So it came as no surprise when Gijón was selected as a host city for España 82. 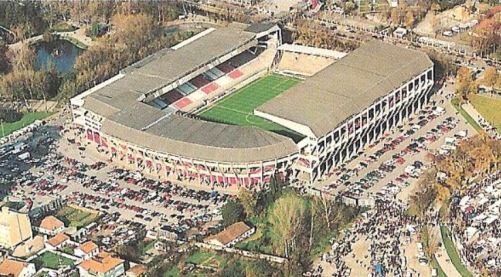 Sporting’s El Molinón stadium is the oldest in Spain, having been first used by the club in 1908. Not that anything remained of the original stadium and there is some dispute as to whether the actual site of the current ground is the same that was used all those years ago, but hey, let’s not let that get in the way of a good story! The stadium had undergone some significant redevelopment in the early 1970’s, but Gijón wanted to put on a show and the municipality coughed up the money for two double decked stands. In 1980, the south stand was extended to include an upper tier of seats and in the summer of 1981, the east side or Tribuna Nueva was built. This was by far the tallest of the four covered sides and dominated the stadium. There was a problem however. Taken separately, each of the four stands were perfectly functional, but because of the differing heights and the cack-handed attempt to link them with a series of free-standing hoods, El Molinón ended up being the worst designed stadium at España 82. It was an ugly compromise of awkward angles which looked dreadful. The club and the municipality hated it. Much has been made of the fact that this was the first, and to my knowledge, the only major European stadium designed by a woman, but it was nothing more than bad design. The stadium hosted three Group II matches in total and quite eventful they were to. You can read more about El Molinón here.

ALGERIA vs WEST GERMANY – GAME 1 GROUP II
Tournament favourites West Germany faced 1000/1 outsiders Algeria in the opening game of Group Two. However, the bookies were made to look foolish as Algeria, led by African Footballer of the Year, Lakhdar Belloumi, stunned the current European Champions. The West German’s dominated possession, but their front line was proving wasteful and in the 54th minute Madjer gave the newcomers the lead. Rummenigge equalised for Germans on 67 minutes, but a minute later Belloumi scored as Algeria regained the lead. The African’s held on to record a memorable upset that ranks alongside the USA’s victory over England in 1950 and North Korea’s victory over Italy in 1966.

WEST GERMANY vs CHILE – GAME 3 GROUP III
Germany restored some pride with this resounding victory over the South American’s. There had been doubts over Rummenigge’s fitness, but the German Captain scored three times and Reinders added a fourth in a dominant display. Chile’s Moscoso scored the best goal of the game right on time, but that was no consolation to La Roja who had now slumped to defeat in their opening two games.

WEST GERMANY vs AUSTRIA – GAME 6 GROUP II
The World Cup has had its share of dour matches and others ruined by violence, but this particular game will go down in history as one of the most disgraceful. With Algeria’s narrow win of Chile taking place 24 hours earlier, West Germany & Austria knew that a narrow win for the Germans would see both teams through to the second round. After Hrubesch had given West Germany the lead on 10 minutes, the game descended into farce with both teams holding possession for long periods and making no serious attempt at goal. Algerian fans in the crowd booed and heckled both sides, and many supporters of Austria & Germany also showed their contempt at the proceedings. The Algerian FA protested to FIFA that the game had been fixed, but the protest was rejected. At least some good came out of this sorry affair. Future tournaments would see the final two group games played simultaneously.