Ibiza is famed for its tourism, night-life, music & Phoenician heritage. However, its footballing pedigree is at best questionable. Over the years, the island has played second fiddle to Mallorca when talk has turned to God’s own game.

Until recently. the most successful team to hail from the island is Sociedad Deportiva Ibiza, who were formed in 1957 and reached the Tercera in 1961. Here they remained for the next 17 seasons, finishing runners-up in their debut season and again in 1966-67. That second runners-up position earned a place in the promotion play-offs, where SD Ibiza beat Madrid based Colonia Moscardó 4-3 on aggregate. However the Galicians CD Lugo had their number in the next round winning 4-1 over two legs. The club’s first Tercera title was secured in 1977-78 and with it came automatic promotion to Segunda B. Here they remained for the next six seasons, never finishing higher than 13th, before finally succumbing to the drop in 1983-84, thanks to a measly total of five wins and 22 points.

Over the next decade, the club resided in the Tercera except for two season long returns to Segunda B. The first in 1989-90 ended in relegation, whilst a second Tercera title earned another visit in 1992-93. This time SD Ibiza achieved their highest ever finish of 11th, but true to the 1990s tradition, they started to “Large-it in Ibiza” and ran up substantial debts. With the wages unpaid at the season’s end, the club was relegated to the Tercera. It was a sign of things to come as the following season saw the club struggle on & off the pitch and drop to the regional leagues. In 1997 SD Ibiza merged with UD Ibiza to form Club Esportiu Eivissa, taking its name from the Catalan for Ibiza. What followed was a microcosm of the former SD Ibiza; Reasonable results to start with in the Tercera and then a title and promotion to Segunda B in 2007. The club was now known as Societat Esportiva Eivissa-Ibiza, and that first season in the third tier saw the club record a very respectable 7th place finish. However, with mounting debts and a drastically cut budget, Eivissa was relegated to the Regional Preferente in May 2009 after failing to pay the players wages. The club struggled on for another season, under the name of UD Ibiza Eivissa, before eventually folding with debts of €1m.

The first stadium that SD Ibiza used was the Campo de Municipal Deportes, which stood between the Carrer Balears & Carrer Canarias in the district of Sa Bodega. It consisted of two open terraces on the east and west sides, and narrower terraces at the northern and southern ends. Changing facilities were housed at the southern end, next to tennis courts, which still stand next to the Parc de la Pau, which now covers the site of the former football ground.

In 1991, the municipality opened the Estadi Can Misses to the west of the town, which was three parts impressive, one part barren wasteland. On opening, Can Misses was horseshoe-shaped enclosure that held 9,000 across three open terraces. The third side was left open. During the summer of 2002, the municipality refurbished Can Misses, by upgrading the artificial pitch and building a single tier stand on the west side that included changing & media facilities. The bank of blue & yellow seats tapered away to the north and south sides, whilst the central section was covered by a canvas sail-like cover. Unfortunately, it was a case of style over substance. In November 2012, high winds damaged the cover and it was not replaced until the start of the 2013-14 season.

Following the demise of SD Eivissa, Can Misses went a couple of seasons without staging senior football. In 2011 UD Atlético Isleño moved into Can Misses, but debts quickly accumulated and they ceased to be in 2013. In July 2015, former Valencia President Amadeo Salvo registered Unión Deportiva Ibiza-Eivissa with the local federation. Salvo had to pay €60,000 to the local federation to satisfy the debt accumulated by the club of the same name that was liquidated in 2010. UD Ibiza-Eivissa reached the Tercera in 2017-18, and finished third in their debut season. Their chance for promotion seemed to have passed after they lost to Atlético Levante in the play-off final. However, the demise of Lorca FC, left a vacancy in Group IV of Segunda B for the 2018-19 season. The Spanish Federation put the place out to tender, and decided on 8 August 2018 that UD Ibiza-Eivissa had the best prospectus of the clubs that were prepared to meet the registration fee of €480,000. 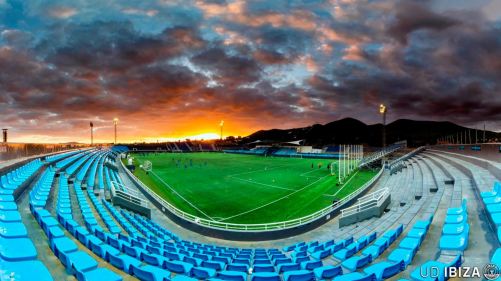 Under Salvo’s leadership, UD Ibiza (they dropped “Eivissa” in 2021) went from strength to strength. That first season in Segunda B saw a 6th placed finished, whilst the curtailed 2019-20 season saw the club finish runners-up in Group I of Segunda B. Due to the pandemic, the Play-offs were played as single-legged match at a neutral venue. UD Ibiza fell at the first hurdle, losing 1-2 to UE Cornellá at the Ciudad de Málaga. Undeterred, UD Ibiza finished top of their sub-group in 2021, and overcame Real Madrid Castilla & UCAM Murcia in the play-offs to earn promotion to the second tier. With little option to play elsewhere, UD Ibiza signed an agreement with the local council for exclusive use of Can Misses. Under the deal, the club will foot the €2.3m bill to upgrade facilities to Segunda standards. The artificial turf was replaced with a natural grass surface and temporary stands that had been installed in January 2020 for the club’s Copa del Rey tie with Barcelona, were upgraded. The west stand’s changing and media facilities were also upgraded ahead of the 2021-22 season., taking the revised capacity to 6,200.