The 1970s was not a good time for Real Club Deportivo de La Coruña. The majority of the period was spent at the wrong end of La Segunda and there had even been a trip to the regionalised Tercera. Despite the lowly status of it’s resident club, the coastal town of A Coruña was selected as a host for España 82. This was down to the fact that the local council had big plans for their ageing Estadio Riazor. Big and it has to be said, quite eccentric plans. 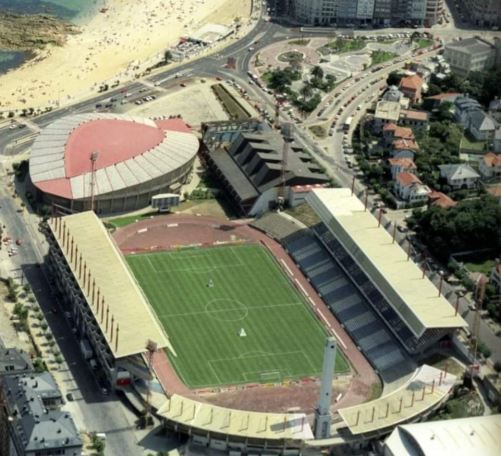 Deportivo dropped out of the second division again just as work got underway preparing the stadium for the World Cup. This required almost total reconstruction and the municipality dipped into the public coffers and forked out over 80% of the 500 million pesetas bill. Two double-decker stands went up on either side of the pitch, whilst at the western end, two stands curved around the terrace, either side of the Marathon tower. All four roofs were identical in design and reflected A Coruña’s maritime past, with sail-like roofs supported by cables that were anchored like mooring ropes on concrete blocks behind the stand. For the duration of the tournament, the east end was left open, but following Deportivo’s return to La Segunda, temporary stands were erected for league matches, giving it a new capacity of 29,000. The new configuration did not last long however, for as Deportivo rose to the top of the Spanish tree, so the Estadio Riazor adopted a more conventional look in 1998. You can read more about this magnificent stadium and the history of Deportivo la Coruña here.

PERU – CAMEROON – GAME 1 GROUP I
Although the game ended scoreless, it was still a pretty entertaining game. Cameroon made most of the running, with Peru struggling to contain their physically stronger opponents. Both sides had good chances to score, with a goal from Roger Milla being incorrectly ruled out for a non-existent offside, and Uribe coming close for the South Americans.

POLAND – CAMEROON – GAME 4 GROUP I
Group I was quickly becoming the group of dearth as Poland & Cameroon played out a third goalless draw. Poland had the better of the first period, with Boniek and Lato denied by smart saves from Thomas N’Kono. In the second half, Cameroon exposed the Polish defence on a number of occasions with good counter-attacking. Despite this, the game ended 0-0 and both teams entered the final group game without a win, but still in with a chance of qualification.

POLAND PERU – GAME 5 GROUP I
After the drought came the flood. At last Group I burst into life, but it still took an hour for the first goal to arrive. Not that Poland can be blamed, as they created a number of chances in the first half, being denied by Quiroga the Peruvian keeper, the woodwork and a linesman’s flag. Poland found its range in the second half, with five goals coming in 21 minutes. Peru struck a late reply, but their World Cup was over as Poland progressed to the second round.